Posted at 10:49h in Yellowbill by admin 0 Comments
0 Likes
Share

Greetings, FAS members and friends. I hope that all of you are staying safe and healthy as we enter a new year. Needless to say, 2020 did not go the way that anyone had hoped or planned. I am certainly with all of you in hoping that the coming months will bring some reprieve.Thank you for being so understanding and receptive as FAS adjusted to the circumstances.

On Tuesday, January 12, FAS will hold its monthly general meeting over Zoom. Our speaker for the evening will be Ken Sobon from Chico, CA, who will be talking to us about the Northern Saw-whet Owl.  Ken, an avid birder who is involved with Altacal Audubon and Audubon California, is director of the Northern Saw-whet Owl Research and Education Project in Northern California. You definitely do not want to miss this presentation! Please join us on Tuesday, January 12 at 7:00 PM. To receive the Zoom link for the meeting, please register here.

Thank you again to everyone who attended the December 8 general meeting. Gary Woods’ presentation on his bird photography was enthralling as always!

The Lost Lake CBC was held on Sunday, December 20. A total of 18 people participated, and between all participants, 233.53 miles were covered (190.93 by car and 42.6 on foot) and 81.5 hours were spent counting (28.5 by car and 53 on foot). During the count, 118 species were observed and the total number of individuals counted was 21,277. By far the most numerous was the European Starling, who came in at 2,799 individuals. Other species with high counts include California Gull (1,887), White-crowned Sparrow (1,854), Canada Goose (1,106), and Brewer’s Blackbird (1,061). Species that were seen in all count sections include Mourning Dove, Black Phoebe, California Scrub Jay, Common Raven, Ruby-crowned Kinglet, and European Starling. Some of the species that were documented in only one section include Northern Saw-whet Owl, Virginia Rail, Sora, Green Heron, Osprey, Downy Woodpecker, Hairy Woodpecker, Marsh Wren, Tricolored Blackbird, and Vesper Sparrow. Thank you very much to all who participated⏤I can’t tell you just how much I appreciate your help!

To end this message, I’d like to share a few pictures of a Rufous-crowned Sparrow with all of you. This individual was photographed in the foothills of Tulare County. This species occupies habitat that consists of dry hillsides with grasses, rocks, and scattered shrubs.  Enjoy!

Please take care of yourselves!

At the December Fresno Audubon Society board meeting, the board voted in the following slate of officers directors:

Rachel Clark continues as President for the second year of her term.

Radley Reep was re-elected to a two-year term as Vice President.

George Folsom was elected to a two-year term as Treasurer.

Barbara Bailey continues as Secretary for the second year of her term.

Robert Snow continues as Past President and Co-secretary as well as YellowBill and website editor.

Nancy Griesser was elected to a two-year term as director and Membership chair.

Judy Johnson was re-elected as director for a two-year term.

Rich Gilman was re-elected as director for a two-year term.

Membership with Fresno Audubon Society is available for students, for individuals or for families. We also offer a lifetime membership. Your dues will help us pay for our Zoom subscription, insurance for field trips and citizen science, communications and other costs of doing business. Please see our first annual report for more information how we spend dues money.

Our membership year runs from September 1 to August 31 the following year. To join Fresno Audubon Society or to renew your membership, please visit our website here.

What do you know about Saw-whet Owls? If you’re like most of us, probably not much. But these little birds are all around us, year-round, fighting out their fierce lives in our forests and woodlands. Come learn about these neighbors from Ken Sobon, director of the Northern Saw-whet Owl Research and Education Project in Northern California.

Ken Sobon is an avid birder, field trip leader, Vice President of Altacal Audubon Society, and is now the Northern California representative on Audubon California board of directors. For the past five seasons he has been the Director of the Northern Saw-whet Owl fall migration monitoring project. In addition, Ken has been a science teacher to middle school students in Oroville since 1995. He has shared his love of science and birding with his students both in the classroom and in field.

To receive the Zoom link for the meeting, please register here.

All field trips, including our virtual field trips are on hold as long as our area is in lockdown. The board has decided to not restart gatherings as long as Fresno County continues to be a hotspot of COVID-19 infections.

We would also like to offer the following suggestions for birding on your own. Birding alone or with a household member is permitted as a means of exercise as long as a six-foot separation from others is maintained (see for example Fresno City Emergency Order 2020-13). Many public parks and other areas are now closed, but these areas below remain open. Be sure to follow any parking restrictions when birding these areas.

eBird Essentials, a free course from the Bird Academy

Get up to speed on how the largest biological citizen-science program in the world can help you with your birding. The eBird community gathers more than 100 million bird sightings each year from people like you. Providing a powerful tool for motivated bird enthusiasts everywhere, eBird helps you find more birds and keep track of your sightings. Collectively, these sightings are now empowering a global scientific community and helping answer pressing conservation questions. Full of video tutorials, this course will get you ready to confidently store and share your sightings with eBird. Read more…

Fresno-Madera Birds
by Jeff Davis
Including reports for the period of
November 16, 2020 to December 15, 2020

The Neotropic Cormorant discovered at Wahtoke Lake November 6 remained there at least through November 20 (CR).

The dark-lored “Mountain” White-crowned Sparrow breeds at high elevations in the Sierra, winters mainly in Mexico, and is rarely detected in our area away from breeding sites. One photographed on the Madera County side of Millerton Lake December 2 (ph. RS) provided our first winter record.

We average about one Black-throated Gray Warbler each winter.  Our first this winter was reported from a residential yard in south-central Fresno December 6 (JN).

If you make an interesting observation, we’d love to hear about it. We are especially interested in birds listed as casual or rare on the Fresno Audubon checklist and those found out of season, out of normal habitat, or in unusually large numbers. Please submit reports to Jeff Davis (559-246-3272, jndavis@ucsc.edu), the Fresno County Birders e-mail list, or eBird.

Birds in the News
Links to Recent Articles on Birds

By the time I got there in early September, Vradenburg, a biologist with the U.S. Fish and Wildlife Service, had been picking up dead birds at the Tule Lake National Wildlife Refuge along California’s border with Oregon for more than a month. The signs of drought were all around: Brush growing in ponds that once held knee-deep water, scaly cracks at the bottoms of dry irrigation canals, a fog of wildfire smoke obscuring the hillsides. Read more… 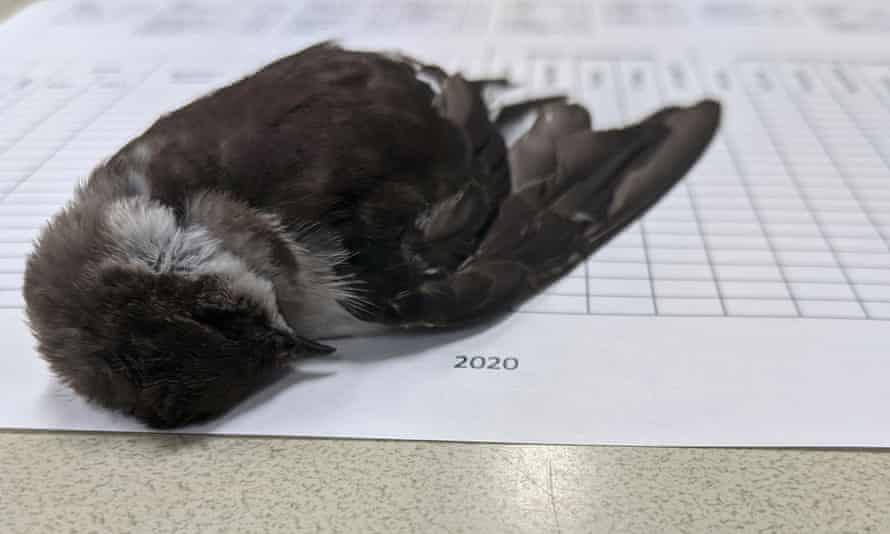 The mass die-off of thousands of songbirds in south-western US was caused by long-term starvation, made worse by unseasonably cold weather probably linked to the climate crisis, scientists have said. Read more…

Do birds chirping make people happy? This is what a new Cal Poly study says

Feeling stressed? You might want to head outdoors, according to a Cal Poly study.

The study found that hearing birdsong while hiking outdoors improved people’s overall well being, more than if they hiked without hearing birds chirping, according to a news release from the San Luis Obispo university. Read more…

Longer days signal to birds when they should breed and lay their new clutch of eggs, and they match up their timing so that their chicks are born when the springtime’s bounty is at its peak. (Nathan Rupert via Flickr under CC BY-NC-ND 2.0)

People might admire the glowing, golden aura of a city illuminated against the night sky, but the consequences for wildlife aren’t so beautiful. Light pollution from artificial sources at night disrupts how animals process their environment, and it’s triggered crashes in insect populations, an uptick of migratory birds colliding into buildings and even changes in underwater ecosystems. Read more…

Photographing Northern Harriers Flying Over the Grasslands at Dusk

I’ve always found northern harriers to be a raptor species that stood out from most others. Their hunting method provides ample opportunity for creative photography as they glide over gorgeous marshes and grasslands searching for food. On this particular evening, I visited a new grassland in the middle of New Jersey that I had not visited previously to see if I could capture some photos of these beautiful birds. Read more…

Migrating Canada geese, in their iconic v-formations, can fly an astonishing 1,500 miles in just 24 hours. They can also waddle indefinitely around your local office park.

In recent years, more people across the United States and Canada have noticed the noisy black-and-white-headed birds taking up residence year-round on golf courses, lawns, and other green spaces. Have these geese, perhaps encouraged by milder winters and easy suburban living, simply stopped flying south? In many cases, yes—but the explanation is complicated. Read more…

The Missouri Department of Conservation has joined an international network that tracks the large-scale movements of birds, bats and large insects. Sarah Kendrick, state ornithologist, said in the last year the department became a part of the Motus Wildlife Tracking System. The system allows researchers across the globe to gather and share information on migrating birds. Motus began in 2014 by Bird Studies Canada with other Canadian partners but has since spread to 31 countries across four continents. Read more…

How a Young Eagle Huntress Kicks Butt at a Kazakh Tradition

When Mongolia closed its borders earlier this year due to the pandemic, Marinel de Jesus was organizing an all-female trip there and filming the annual winter migration of nomadic families in the Altai Mountains. She focused her documentary work on female Kazakh herders, from the country’s largest ethnic minority. “While doing research on the Kazakh nomadic migrations, I quickly learned that most of the articles or films about the subject involve merely the voices of local males or male explorers. This particular narrative is devoid of female perspectives and voices,” writes de Jesus in an email. “I discovered that my suspicion was right all along—women were the leaders of nomadic migrations in the past.” Read more…

Fresno Audubon members have been submitting some really terrific photographs to this column. If you would like to add yours to the mix, please send your photo in jpeg format to rsnow@fresnoaudubon.org with a brief description, where the photo was taken and how you want the photo credit to read. Birds may be from anywhere. Limited space may restrict publication to a later issue. We will also showcase your photos on our social media.

Sorry, the comment form is closed at this time.